It would be no lie to say I was quietly confident and openly hopeful coming into the UTMB this year. After a hiatus of 3 years without fast racing (I don’t count Barkley Marathons, because I think that is a completely different sort of challenge, and thus not comparable), with COVID and a second child in-between, I’d finally started to feel fit.

We’d spent the summer holiday visiting family and friends in Europe (we took the ferry, car, and dog), including 3 weeks in the Alps, a genuine training luxury for someone who works full-time alongside being mum to two small children. As a result, I arrived in Chamonix, after an 18-hour journey from Edinburgh by train and bus, excited but also relaxed in the knowledge that I’d done everything within my powers to prepare.

In the end, the race didn’t go to plan. My hamstring started to hurt barely 10km into the race, which was both confusing and annoying, albeit still entirely sufferable. Much more worrying was my stomach, which felt off already before the race start, and had me dodging off into the bushes (I made use of those bags we got, but I think UTMB could have done with better signposted toilets at checkpoints too!) for half the night, and which ultimately prevented me eating anywhere near as much as I usually would. By Courmayeur my body seemed to have cleared itself out and I was starting to feel better, just empty. The subsequent climb felt slow and laboured, and I was overtaken by a few people on the easy section to Arnouvaz. I stayed a while to eat well there, including 2 lots of noodle soup, bread, cake, melon, and also a gel, but I think the damage had already been done. As I started the climb of Grand Col Ferret I ground to a halt, quite literally. Runners began streaming past, offering words of encouragement as they did so. A concerned pair of hikers kept catching me as I shuffled upwards, and even offered me some food of their own (I had lots, so declined with thanks).

My progress by then was so slow, and I felt so drained, that I debated returning to Arnouvaz, but the idea of going backwards was too sad. At some point, when I realized my race was over, I sat down and had a little cry, not only for all the training, the week spent away from the children, and all the people following me at home, but also because after 14 hours of pushing myself despite suffering, I suddenly remembered how mountains make me happy, and I hadn’t had the energy to even contemplate them until that moment.

In the end I made it to the Col, and walked from there to La Fouly, although I stopped several times for a sit down en-route. I planned to drop out there, but stopping is a hard thing to do, and ultimately, I carried on to Champex Lac, and then Trient, where I finally called it a day. Failing to finish a race isn’t really like me (only my second ever DNF I think, not counting Barkley), and I still feel oddly guilty for doing so, especially as so many people seem to believe in me. But I think there is strength too in knowing when to stop, and I hope that I can now turn the disappointment into a positive advantage in the next running challenge I face.

I’m grateful and happy that my attempt to run UTMB in a climate conscious fashion received a share of the public and media attention this week, and I sincerely hope that it will be a catalyst for action in the running community and beyond, towards a fitter planet for all.

I’d like to finish with a big thank you, to my super coach Damian Hall, Renee McGregor for her very generous advice on nutrition, my friends The Green Runners, my Czech family (Eve, Jiri and Jana) who used their summer holiday to crew me (!), Renee Mand especially my family at home who make it all possible, I can’t wait for hugs when I get back tonight. 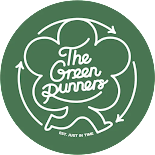