As 2018 turns to 2019, it seems like a good time to reflect on the running year gone by, in particular the challenge of coming back after having a baby. Winning the British Championship this year was a real surprise, and a great honour. But it would be a lie to claim it was easy, so I felt I should write down a few lines - with other new mums in mind - to say how it really was.

Firstly, I should point out that I have been incredibly fortunate, and that I’m well aware that my challenges pale in comparison with those of other new mothers. For a start, I had a straightforward pregnancy and was able to carry on running until the day my daughter was born. Secondly, I had no major trauma following childbirth (I’m currently working with a physiotherapist on closing the separation between my abdominal muscles – diastasis recti – but this is fairly common after pregnancy, and actually hasn’t been a major barrier for me in terms of exercise). Thirdly I have a very supportive family, in particular my husband and parents, who make it possible for me to get out running and racing on a regular basis.

Nevertheless, I still found it hard coming back to running form (I’m actually not sure I have arrived there yet – I realise now that my ‘pre-baby’ expectations on this subject were somewhat naïve!). When I first started training again it was a bit of a shock to discover how unfit I’d become, friends I’d run with comfortably in the past now seemed impossibly fast. Trying to do too much too soon, I picked up a tendon injury and had to reconcile myself to the gym for two miserable months. With the return of the light came a return to the fells, but all too soon also a return to work. Training became a juggling act with baby time, training frequently taking second place, or losing out altogether. To reconcile the two, I started to train from 5-6.30am before work, whilst my little family were cosy warm in bed, but it wasn’t easy, especially after a night of broken sleep (our offspring is not of the ‘sleep through the night’ variety).

Looking back at the end of the season I was slightly surprised, but extremely happy with what I had achieved (British Champion, and being competitive again at a world level in Skyracing at Glencoe Skyline in September). However, maybe as a consequence of contentment, my motivation to train took a definite nose-dive. I found it harder and harder to leave my bed for the cold darkness outside, and realised that I needed a new focus. So I did something crazy, and entered a race I’d vowed I would never ever run, the Spine (a 426km race non-stop along the Pennine Way in mid-January). Realising I’d need to up my game and run more than 30 miles a week in preparation, I also started training in a focused way for the first time in my life. We’ll see whether that’s worked in a week (eek!!!).  The bigger challenge might be of another kind however... my intention to complete the weaning process over Christmas suffered a big blow when Rowan got two viral infections back-to-back and refused to take anything except breast milk for 5 days. Now I’m trying to work out the feasibility of pumping at every checkpoint to keep myself milked... 😉 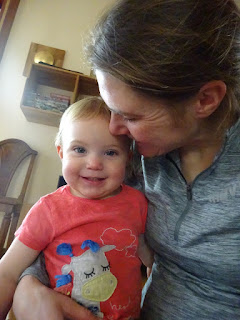 I believe there will be a tracker to follow my progress (or lack of), excellent procrastination for those dark January workdays in the office!
Posted by Jasmin Paris at 1:53 PM 482 comments: